It’s difficult to write when I’m gasping for air and blowing my top. When I was still teaching, walking into a classroom in the morning made me sick—and no, I wasn’t allergic to my students, but I should have been.

Then I retired and for five years, I have been free of wheezy lungs and sinus infections that always arrived with the start of each school year when I worked in those old buildings at the high school where I taught. Have you heard of sick building syndrome? I lived it.

This new, peaceful world changed several weeks ago. Workers came with power tools and mud-caked boots. I should have fled, but I stayed at my computer as a stupid, stubborn, former United States Marine would.

My office has three doors. One that leads toward the other rooms and one that opens to the outside. Then there is the door that opens to the space under the second story and the foundation. That crew drilled, pounded, cut and tracked dirt from room to room—always in my office. I had trouble concentrating. I suffered from memory loss. Plastic tarps covered most of the furniture, and I couldn’t find things. When I left the office to find a moment of peace, I covered the computer and printers with a bed sheet. The noise reminded me of combat but worse, because I was nineteen and then twenty when I was in Vietnam—noise did not bother me as it does now.

Concrete dust floated through the air and my sinuses and lungs rebelled, so I put on a 3M mask with two pink HEPA filters attached. The last time I wore a mask like this was when I was teaching. I searched the garage and found the noise suppresser to help mute the pounding and drilling.  I looked like an explorer to Mars or a survivor of trench warfare struggling to write while the frigid air froze my fingers.

The crew had arrived to bolster the foundation against future earthquakes that might never arrive. Even if a hard tumbler did visit, I doubt that all that work would hold our sixty-year old hillside house together. It still might slide down the hill into the middle of the street blocking traffic.

I could have moved, but I didn’t want to disconnect all the cables and cart the equipment to another room for a few days to escape the dust and noise—something (I soon discovered) that would have been impossible without checking into a hotel.

Even with a noise suppresser covering my ears, muted sounds intruded and the last place I wanted to be was in this chair writing about China, the Vietnam War or being a teacher in the tortured American public schools. I stuck with it for days as my suppressed anger fueled by PTSD started to simmer and fume. 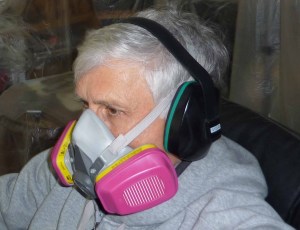 It was a relief when the workers finished. I thought I was going to have the tranquility back where the only noise would be the click of the keys as my warmed hands flew across the keyboard meeting my Blogging goals.

But the workers left something behind.

I started sneezing. My sinuses ran hundred mile marathons. I went to the doctor and he prescribed medications that didn’t work. The sneezing went volcanic—like Mt. Saint Helena blowing its top.  One time, I sneezed so bad, I blew the 3M mask off my face—so much for a mask that’s supposed to protect you from every gas and plague Islamic terrorists can brew. Upstairs or outside, I was fine. But in my office, I was a goner. “Blam, blam, balm,” my nose exploded like rapid shots from a fifty-caliber submachine gun.

I could have opened windows, but it’s been raining for weeks.  The sky has been overcast.  The air breezy and cold.  Then today, the sun came out and I finally let the outside in and the sneezing stopped—I’m crossing my fingers and knocking on wood. I’m afraid to close the windows, but night will come and with it lower temperatures. I fear that whatever industrial poison is haunting my once tranquil office space might return.

Return to A Repeat of Agent Orange in America’s Heartland?

Lloyd Lofthouse, a former U.S. Marine and Vietnam Veteran, is the award winning author of The Concubine Saga.

His latest novel is Running with the Enemy. Blamed for a crime he did not commit while serving in Vietnam, his country considers him a traitor. Ethan Card is a loyal U.S. Marine desperate to prove his innocence or he will never go home again.

And the woman he loves and wants to save was trained to hate and kill Americans.